The Benefits of Deep Work 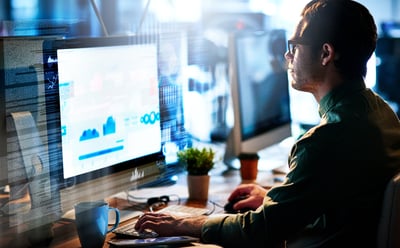 In the 21st century the average workday has shifted considerably.  People are spending less time outdoors and more time interacting with screens rather than human beings.  At the same time, constant upgrades to our technology are altering work demands.  There’s more to do because it’s easier to do, and as a result our tendency toward distraction is intensifying.

This is something I’ve noticed myself.  We keep juggling smaller tasks while tackling the larger, more pressing ones in a constant flurry of multi-tasking.  After a while our attention spans begin to wear thin, but we don’t notice it until we’ve become overwhelmed and unproductive.

In Deep Work, author Cal Newport describes these scattershot tendencies as “shallow work.”  The benefits of “deep work” have fallen by the wayside – an  unbroken concentration on a single task.  Participating in deep work is beneficial not only for your work life, but also for your brain and mental health.  Successful people like J.K. Rowling and Bill Gates understand this, tailoring their work schedules to free themselves of distraction.

So why not do the same?

Newton outlines several goals that will return you to “deep work,” citing evidence and case studies arguing that it’s our natural state.  We were never meant to fragment our attention to this extent and become inundated with information.  Through some simple schedule changes and some self-control, you can ease yourself back to a singular focus and reap benefits you’ve been missing for too long.

“One of the most valuable skills in our economy is becoming increasingly rare. If you master this skill, you'll achieve extraordinary results.

“Deep work is the ability to focus without distraction on a cognitively demanding task.  It's a skill that allows you to quickly master complicated information and produce better results in less time.  Deep work will make you better at what you do and provide the sense of true fulfillment that comes from craftsmanship.  In short, deep work is like a super power in our increasingly competitive twenty-first century economy.  And yet, most people have lost the ability to go deep – spending their days instead in a frantic blur of e-mail and social media, not even realizing there's a better way.

“In Deep Work, author and professor Cal Newport flips the narrative on impact in a connected age.  Instead of arguing distraction is bad, he instead celebrates the power of its opposite.  Dividing this book into two parts, he first makes the case that in almost any profession, cultivating a deep work ethic will produce massive benefits.  He then presents a rigorous training regimen, presented as a series of four ‘rules,’ for transforming your mind and habits to support this skill.

“A mix of cultural criticism and actionable advice, Deep Work takes the reader on a journey through memorable stories – from Carl Jung building a stone tower in the woods to focus his mind, to a social media pioneer buying a round-trip business class ticket to Tokyo to write a book free from distraction in the air – and no-nonsense advice, such as the claim that most serious professionals should quit social media and that you should practice being bored.  Deep Work is an indispensable guide to anyone seeking focused success in a distracted world.”