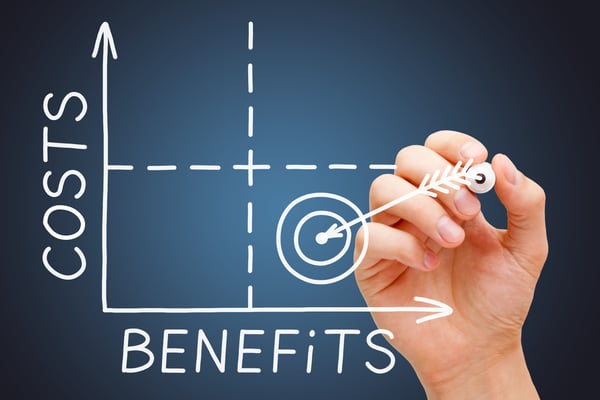 If you are hoping to redefine and supercharge your value proposition, you’ll want to consider bringing up non-utility-cost financial benefits. As just one example, how many people trying to sell energy solutions actually take the time to quantify and monetize the value of improved productivity?  All too often I hear a “salesperson” (as opposed to “sales professional”) say, “I told them it would make their people happier and more productive, but they seemed unimpressed.”  Did they offer any compelling facts and figures?  No.

Let’s consider the average “open office” layout… Chances are you’ll find that the space planner had budgeted for about five people per thousand square feet. Note that this figure includes not only the workstation, but also things like hallways, kitchens, bathrooms, elevator lobbies, and other shared space.

Supposing you have 200 square feet allocated to each person and an average salary of $40,000 a year per person, you would divide the 200 into the $40,000 and wind up with a payroll estimate of $200 per square foot of floorspace. Now, if you compare that figure to the national utility bill average of about $2 per square foot, it's becomes clear that your payroll is about a hundred times as large as your utility bill on a cost-per-square-foot basis. If that's the case, you have to ask yourself, “What if my energy campaign boosted worker productivity by even just 1%?” This small increase in productivity could offset the entire utility bill!  It wouldn’t appear on the same line item as utility expense; however, it would have as positive an impact on the organization’s bottom line as if you had eliminated the utility line item altogether.

So, what kinds of things have an effect on productivity? Thermal comfort, indoor air quality, window films, lighting (particularly if it reduces computer monitor glare)… the list goes on and on. If your energy-related solution has any potential positive effect on occupant productivity, you’d be foolish not to include it in the discussion… and to do so in a quantified and monetized manner... with data in hand to back up your claim.

For more examples of non-utility-cost financial and non-financial benefits, check out our powerful online/on-demand research tool, Segment GuidesTM.  We also have a new Segment Guides Webinar Series™ that walks you through 20+ market segments, including the role of energy in each segment, jargon and yardsticks, “sound bites” connecting the dots between energy solutions and the things prospects in each segment actually care about, and more.