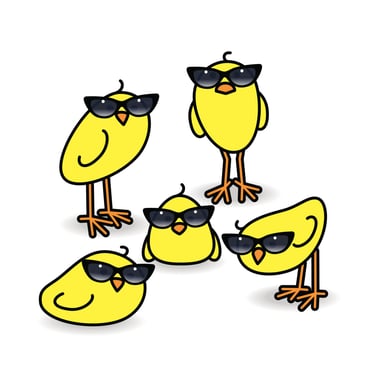 Every now and then you hear about amazing strides being made in the field.  Technology continues to change and adapt, but its unforeseen effects on end users are where the surprises happen.

According to one of our ninjas in Iowa, there have been unbelievable benefits concerning LED lighting in agriculture, particularly concerning its effects on farmers.

-  Recent findings have shown that if you program the wavelengths of LED light to change from red to blue in nanosecond intervals, they can accelerate growth in crops like radishes.  Some of the results chart growth up to 6x faster than normal.

-  Chickens are notorious for attacking each other, particularly when they see blood.  In the past, farmers would outfit them with blinders (aka “peepers”) or little red sunglasses to prevent them from injuring each other.  Now they simply have to change the lighting wavelengths to red.  The chickens are seeing their world “through rose colored glasses” (sans actual glasses) and become much more docile.  This prevents chickens from injuring or killing each other and protects eggs from getting broken during the scuffle.

-  Pigs can’t see the red spectrum.  This has been beneficial during night shifts at swine houses.  By switching the lighting wavelengths to red, workers can clean stalls, maintain equipment and transport sick or injured animals without waking the others.  As a result, productivity has increased and the animals are healthier because they are able to sleep through the night.

-  You may have heard me mention this benefit before, but LED lighting has caused a 6 – 8% increase in milk production for dairies.  Cows are more docile and can relax during their milking, which reaps other benefits.  In one case, it brought the payback of the lighting project from four years to three months.

Strides are being made ALL the time.  These are just examples in a single segment.  If you’re wondering what kind of non-utility-cost financial and non-financial benefits might be associated with energy projects in your target market, I recommend subscribing to our Segment Guides.