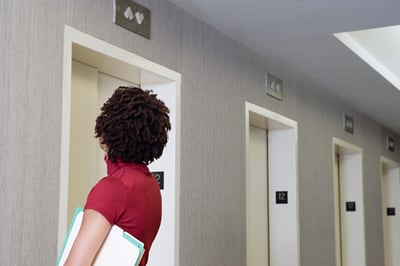 Selling efficiency products and solutions takes a lot of creativity. There isn’t a single trick that will work in every situation, and it’s your job to figure out what angle will turn your prospect into a customer.

I heard a story years ago about an office building in New York City where people were vociferously complaining about how slow the elevators were. The landlord finally realized that he needed to address the issue, so he began seeking quotes from elevator vendors.  They said they would be able to increase the speed of the elevator by completely changing all the gearing.  It would be about a quarter-of-a-million-dollar fix.

The landlord, being a creative thinker himself, decided to take another approach. He wasn’t willing to invest that much money simply to save people a few minutes a day. Instead, he decided to cover the walls of the elevator lobby with mirrors.  People looked at themselves while they were waiting, and they never complained about the elevators again. His lateral thinking saved him a quarter of a million dollars… less the cost of a dozen floor-to-ceiling mirror panels!

So what does this story prove? Well for one thing, it proves that the elevator salesperson was not very savvy because he began his proposal with the cost of the project as opposed to the value and benefits. But the bigger moral of the story is that lateral thinking can lead you to a creative solution that may help you close a sale.