The more you understand “net margin” and “contribution margin,” the more confident you will be discussing these topics with a prospect, whether it’s a CFO, a business manager, or a sole proprietor. 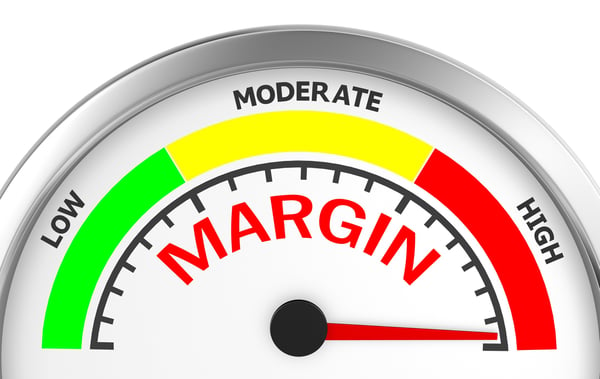 Most people are in business to make money.  However, some people are in business because they want to change the world.  In either case, it’s often helpful to express the savings you project in terms of the amount of work they have to perform to produce equivalent profit the old-fashioned way – doing what they do now.

By the way, you may be wondering why I use net margin, which is an after-tax construct, even though savings are often expressed as a before-tax figure.  It’s because unless you’re accomplishing savings through behavioral changes alone (i.e., no investment), you’re likely to have depreciation and perhaps other tax benefits shielding much of the resulting savings from taxation.  That said if you prefer to use before-tax net margin, feel free to do so.

Returning to our initial example, if you generated an extra $1 million in revenues without having to add any new fixed costs, you would wind up seeing more than the “net margin” of those revenues hit the bottom line. That’s because you were already covering your fixed costs at your previous level of revenues.

An example will make this clearer.  Let’s assume you’re running a coffee shop.  Let's assume you’re selling 1,000 cups of coffee a day and using one barista, one machine, one dishwasher, one shop space, etc.  Those items are fixed overhead.  If you sold an extra 10 cups of coffee, you would only have to pay for the incremental cost of the coffee, the steamed milk, the cup and the lid. Those are your variable costs.  You wouldn’t need another barista, or another machine, or another dishwasher, or a bigger shop. In this case, you would make more than your typical net margin on those extra 10 cups of coffee because there would be little to no effect on your fixed overhead.

"Contribution margin, or dollar contribution per unit, is the selling price per unit minus the variable cost per unit.  Contribution represents the portion of sales revenue that is not consumed by variable costs and so contributes to the coverage of fixed costs.  This concept is one of the key building blocks of break-even analysis."

How does this distinction play out when reframing the benefits of efficiency in terms that will make it easy for your prospects to visualize?   Assume your proposed energy upgrade is projected to produce $10,000 in annual bottom-line benefit through energy savings, maintenance savings, or even some non-utility-cost financial benefit like reduced scrap rate since occupants can now see better.  Assume that your prospect is accustomed to earning a 10% net margin.  You could say that your upgrade would give them the same net profit they earned by selling $100,000 of goods last year.

On the other hand, it would not be fair to say that it would be the equivalent of selling an extra $100,000 of goods.  Why?  Because they might be able to sell that extra $100,000 of goods without adding to their fixed costs, in which case they would enjoy a positive impact that would be more accurately calculated using their contribution margin, not their net margin.  Since contribution margin is higher than net margin, the amount of equivalent incremental sales needed to match your projected savings would be lower.

That’s why I always phrase the comparison as follows:  “Think of how hard you had to work last year to generate this same bottom-line benefit…”  Phrasing it that way underscores that I’m talking about their existing revenue, and their existing fixed and variable cost structure, which allows me to use the net margin figure (which is lower than contribution margin) and generates a higher amount of equivalent revenue.

Fortunately there’s a plethora of information out there to help you understand financial statements.  Use it and it will help make you both more intelligent and more confident as you reframe the benefits of efficiency using terms and revenue equivalents that resonate with business people.