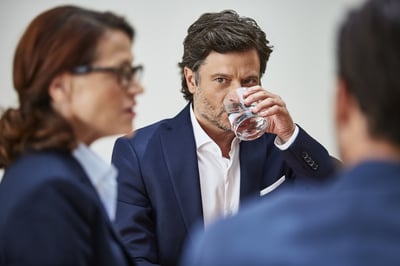 What do you do when your prospect says, “I need a two-year payback”?  One of the first things you should ask is, “Could you share with me how that expectation was derived?”

By the way, the power of the question is magnified greatly by silence afterwards, so resist the urge to restate the question or to embellish it. Ask the question once, and just sit back and listen. I tell my students that if they themselves feel uncomfortable with silence and feel an urge to break it, they should just take a sip of water, or even apply some lip balm… Your prospect knows that you’re not going to be the next one talking with a glass of water or lip balm pressed against your lips. It makes it even more obvious that the prospect will have to fill the silence in the wake of your powerful question.

Your prospect will likely reply with something like, “I don’t know… it’s just what I’ve always looked for.”
“How long have you been in business?”
“About 30 years.”
“Well, you know something, 30 years ago when the rates on alternative investment vehicles were higher (remember the early Eighties when the prime rate exceeded 20% and it was common to get 6-month CDs earning over 16%?), maybe 50% a year made sense; however, it certainly does not make sense now. Is there anything else that you do in your portfolio (that is legal) that gives you a 50% return? Is there any other core business project that you’re about to invest in that’s going to give you 50% return?"
“Uh, come to think of it, no. Our CFO would be thrilled to make 50% a year on our core business; frankly, we’re happy to see 15% these days.”
“Then why in the heck would you ever require this efficiency investment to give you a 50% return?”

I often coach my students to use “challenger selling.” This is certainly a great example of when challenging your prospect’s assumptions is vital to your success in selling that prospect an expense-reducing capital improvement that sports a simple payback of greater than two years.

There are several other ways you can approach this conversation, by the way. You might say, “Well, John, if you were to estimate how many energy-saving maneuvers we could do in your entire building that would qualify at the two-year payback or less, what percentage of that universe of potential measures do you think it would be?” As mentioned above, when you ask a powerful question, just zip it.  Don’t say another word.  Silence following a powerful question makes it all the more powerful. Your prospect will likely respond, “I don’t know, maybe 10%?” You might respond, “Great. How do you feel about marooning 90% of your potential opportunities to save energy in this building because you’re using an overly aggressive metric for approving projects?” One final piece of advice… Whenever you ask a question like that, be sure to drop your intonation at the end of the sentence. A rising intonation – which most folks would typically apply when speaking this question – is not nearly as powerful as a falling one.