Efficiency on the Farm 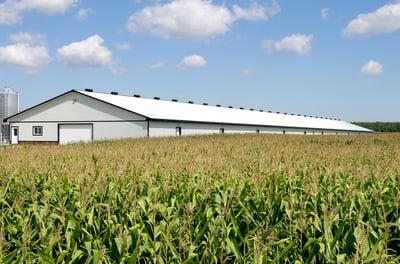 Huge strides are being made when it comes to efficiency in agriculture, particularly regarding farm animals.  I recently read a study about chickens becoming more docile when illuminated with red LED light.  They were looking at the world through rose-colored glasses!  And since everything they saw was red, they would never notice a spot of blood on a fellow chicken’s feathers, which might have triggered an instinct to finish off the blood-spattered hen!   No joke.  Making everything appear red makes the chickens less likely to attack one another. Believe it or not, before this technological innovation, some farmers actually clipped tiny red sunglasses onto their chickens’ beaks to achieve the same effect!

If you access this article on the impact of color-tuned LED, you’ll read about this effect and others: "The results showed minor effects of green light on explorative behavior, whereas red light reduced aggressiveness compared with white light. The accelerating effect of red light on sexual development of laying hens was confirmed, and the trial demonstrated that this effect was due to the specific wavelength and not the intensity of light."

There is another study on illuminating chickens' occupied environments with yellow and white LED lighting: "[They] did not show any behavioral sign of preference for one of the environments.  However, birds presented greater feed consumption at 21, 28 and 35 days of age when exposed to white LED lighting. Generally, birds exposed to LED lighting presented better production performance than birds under the CFL [compact fluorescent]. Seven-day-old male chickens presented better feed conversion under LED illumination than did males of the same age under CFL."

(PLEASE NOTE: This next study isn’t recommended for animal lovers, so be warned.)

There are other researchers experimenting with the effects of LED lighting on farm animals.  One of our Efficiency Sales Professional Boot Camp graduates helps pig farmers leverage their facility’s lighting to achieve not only energy efficiency but also production efficiency.  First, they optimize the placement and intensity of the lighting to minimize the shadows.  Why?  I’m told that pigs, as smart as they are, stop in their tracks when they see a shadow because it confuses them.  This causes all sorts of traffic jams at swine houses.  Better lighting also allowed the pigs to find the feed troughs better, so they knock less of their food into the manure.  That one innovation alone can save the farmer a lot of wasted feed.

Another experiment involved slowly dimming the lights at night to put the pigs to bed, and then gradually raising the light levels in the morning to wake them up.  Since they’re experiencing simulated sunset and sunrise in an otherwise windowless factory farm, the pigs were found to grow more effectively within a certain number of calendar days.  They're leaning toward the conclusion that if you use the right kind of lighting in a swine house, you could get a pig to a “six-month” target weight in a period that is five days shorter than the typical cycle.  Doing so saves the farmer five days worth of feed for each of thousands of hogs he raises… and that’s a benefit that trumps the energy and maintenance savings by a significant margin.

It's really fascinating when you think about the science behind these experiments: lighting levels, lighting frequencies, and what can be done to influence animal farming.  Stay on top of the research in these fields and you’re likely to have a more interesting conversation with your customers, whether you’re talking to hen and hog farmers or not!