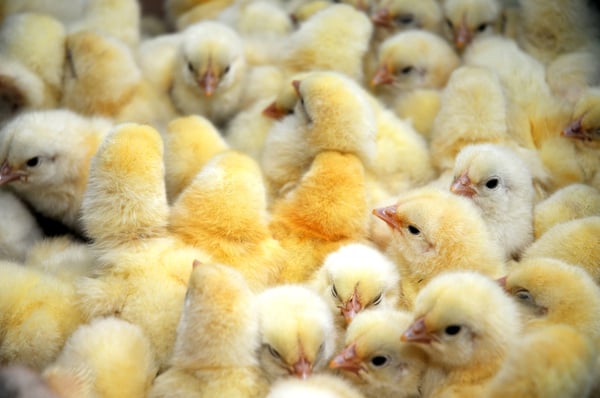 Every now and then you come across amazing fun facts that create surprising outcomes for certain industries.

According to one of our sales training graduates in the Midwest, LED lighting has created enormously positive outcomes for farmers.

Recent studies have shown that by programming LED light to oscillate between red and blue wavelengths in nanosecond intervals, you can make radishes grow six times faster.

Chickens are notorious for attacking each other, particularly when they see blood.  In the past, some farmers would outfit their chickens with blinders (aka “peepers”) or little red sunglasses to prevent them from injuring each other.  Now they simply have to tune their LED lighting in the henhouse to red.  The chickens wind up seeing their world “through rose-colored glasses” (sans actual glasses) and remain much more docile.  This prevents chickens from injuring or killing each other and reduces the number of eggs damaged by scuffles.

Pigs can’t see the red light.  By tuning LED lighting to red during nighttime shifts, workers can clean stalls, maintain equipment and transport sick or injured animals without waking the others.  As a result, worker productivity increases and the animals are healthier because they are able to sleep through the night.

As you may have heard me mentioned before, LED lighting has been associated with milk production increases of between 6% and 15%.  Cows are more docile and can relax during their milking.  Since LEDs generate a lot less UV light, there are also fewer pesky insects flying around.  In one case, the simple payback period of a lighting retrofit was reduced to 3 months rather than 4 years once the value of the increased milk production was included in the denominator of the simple payback period calculation.

If you’re wondering what kind of non-utility-cost financial and non-financial benefits might be associated with energy projects in your target markets, I recommend subscribing to our Segment Guides.  We currently cover nearly 20 popular market segments and another 7 are on the roadmap for 2020.